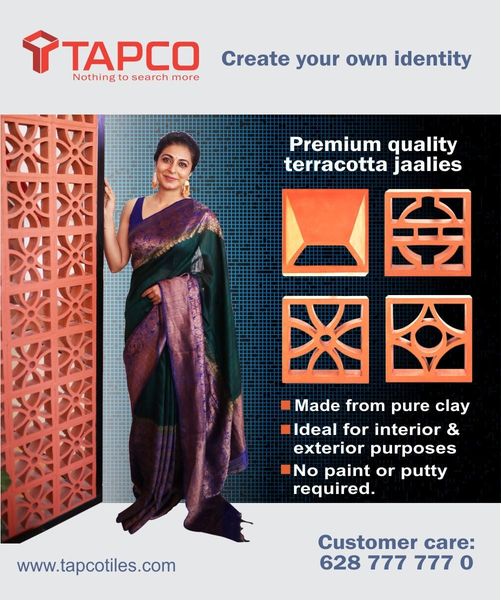 Recently, with more number of modern and traditional constructions, the usage of jaalis had increased. Even if the jaali works were prominent from the ancient time, it was not so popular few years back. But again by considering the benefits with jaalis and also due to its artistic look, it is now a moving object in the market. The Tapco tiles have the best kinds of jaali tiles in Kerala. Different ancient architectural designs even from the Mughal Empire show its significance at the time. You can find jaali works on the TajMahal as well as on the Bibika Makbara. Similarly, there is prominent usage of jaali tiles in various Hindu monuments also.

Initially, the jaalis were carved out of different types of stones. Later on with the advancements in technologies, the jaalis were manufactured out of different materials. The usage of terracotta clay in making accessories, utensils, artistic things and tiles are also age old things. The jaalis are now made out of the terracotta clay. They are became very much popular in the construction field due to several reasons. The Tapco is the leading dealer of foreign made jaali tiles in Kerala.

The major thing, as usual is the air circulation that we can get with the jaalis. This will improve the air quality inside your home without letting it to heat. Other than this, the jaali tiles will definitely add to the beauty of your home or commercial space. This can be a form of adding something artistic to your spaces. Jaali tiles can help you change the look and feel of your space. These can be used for both interiors and exteriors.

There are different types of jaalis tiles available from the house of Tapco. There are jali tiles to suit both traditional and modern kind of constructions. You will definitely find the one suitable for your purpose. The Tapco is the leading terracotta jali manufacturer in Kerala.